Whenever I give lectures on Bad PR, I always try to explain that the life of a PR story doesn’t end when it hits the newspapers – that’s just the start of its life, and once its published, it’s impossible to predict where the same story will surface again.

Sometimes, those stories surface years later, their headline facts stripped of the original (commercially-compromised) source, and used to justify a position far beyond what it was intended to support. Other times, they just resurface in a weird way – today, I have an example of the odder end of things.

Take this recent story in the Mirror:

How many minutes, hours and days you work for free by cutting your lunch break short

It’s something many of us do, but it all adds up – and could even cost you

Not taking your full, allotted lunch break is something so many of us do.

Maybe it feels as if there are not enough hours in the day to get through your work. It could be ingrained in the culture of your workplace. Or perhaps you just want to brown-nose your boss.

Whatever your reasons, that lacklustre, rushed desk “picnic” is doing you no favours.

In looking, as I always do, for the commercial entity who placed this story in the newspaper, I was slightly surprised to see the Mirror attribute the story to Refinery 29:

If you’re not paid through your lunch, then, according to Refinery 29 , that equates to working 6,032 minutes for free each year.

It seemed odd to me that a lifestyle blog like Refinery 29 would pay for PR to appear in the Mirror, so I followed the story through to find it had been posted on Refinery 29’s website… in July 2017!

From there, we can see the originator of the piece was Workthere.com – an office space company. Except, they claim to have posted their PR ‘research’ in September 2018… one year AFTER it appeared in Refinery 29, and a year BEFORE that appeared in the Mirror.

So, when was it? Was this story from 2017 as Refinery 29 say, 2018 as Workthere claim to have written it, or 2019 as the Mirror reported it? There is one last clue that helps us unravel the mystery – according to Workthere’s original press release, the research was carried out in June 2017:

So it seems like Workthere published this ‘research’ in 2017, at which point it was picked up by Refinery 29. Then, a year later, Workthere updated the publication date of their blog, to make the information seem more current. And then, slightly inexplicably, a further year later the Mirror published the story, attributing it to the middlemen, Refinery 29.

In any case, at the heart of all of this is a commercial message to justify the outlay on a marketing survey, and a spokesperson to drive that message home:

Cal Lee, the founder of Workthere says it’s important for offices to instil a lunch hour culture in order to increase wellness at work. Employers are, he says, “increasingly recognising the benefits of ensuring staff are content, happy, and most importantly in good health.”

He continued: “Part of this is creating a productive office environment where employees feel comfortable taking a longer lunch break and engaging with colleagues.”

We’ve seen before, the ignorance of children is always a reliable hook for a Bad PR story, and last week was no difference, with one particular tale getting coverage in the Metro, the Express and twice in the Mirror:

WOULD you believe one in ten children don’t know apples grow on trees? It’s a scary reality.

New research released today has revealed far too many children aren’t aware of the origin of fruit and vegetables grown in England. 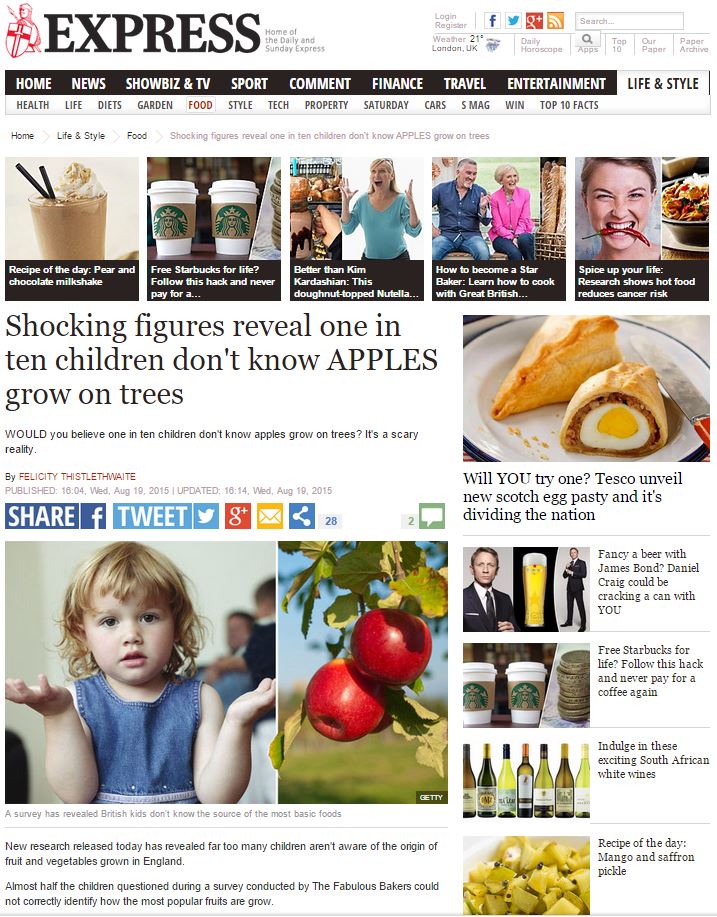 Kids also told the survey honey came from cows and chocolate bars grew on trees – and worryingly, some of the grown-ups were just as bad

Almost half of children who took part in a food poll failed to identify how 10 types of fruit were grown, with some believing bananas were made in factories.

One in 10 of the youngsters, who were aged six to 10, had no idea that apples grow on trees. 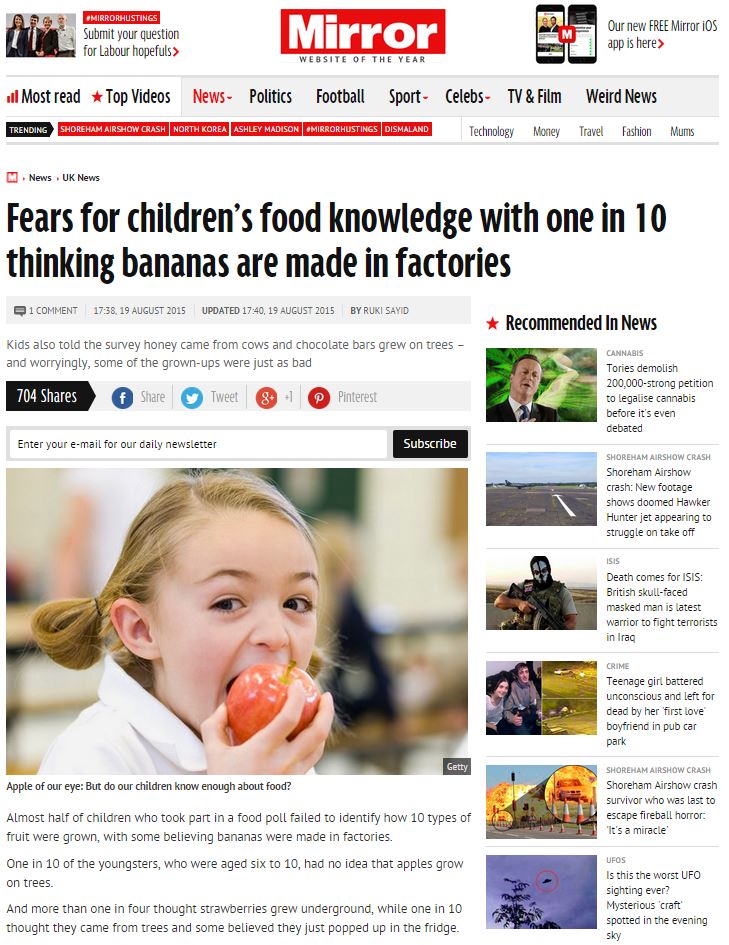 As with many Bad PR stories, these findings would be shocking if true – but as ever, that’s quite a significant ‘if’. Can it really be true that 10% of kids genuinely don’t know that apples come from trees? Can it be the case that ‘some’ kids really do think that strawberries “just popped up in the fridge”, as the Mirror’s version of the story points out? Call me highly skeptical, not least given the source of the claims:

Research conducted this week by The Fabulous Bakers, UK’s only mainstream bakery using all natural ingredients, showed some surprising results…

The Fabulous Bakers conducted its research to mark the launch of its new online film, which aims to educate and entertain children about just how fascinating and fabulous the natural world and its natural ingredients are.

Somewhat convenient, then, that ‘research’ commissioned by a company which markets itself on natural ingredients ‘proves’ that kids know nothing about natural ingredients. Of course, given that the ‘research’ consisted of an online opinion poll, it’s not hard to start to postulate as to how it might not be fully rigorous. How do you ensure the kids are answering about what they really think, rather than what they think would be fun to say? Do the kids even care about their answers? Probably not.

More importantly, can you be absolutely sure the questions were answered only by children? Here, for me, is the crux of it: parents have to sign their kids up for online surveys, and are paid a very tiny amount for each one that’s completed. If your kid isn’t there, you either ignore the survey and miss out on the micropayment… or you pretend your kid is there and bank the cash, clicking your way through the multiple-choice questions at will. Suddenly that ‘some’ people say strawberries simply appear in the fridge doesn’t seem quite so hard to explain now…

Still, at least the Fabulous Bakers got their time in the sun – or, at least, twice in the Mirror:

Victoria Willis of The Fabulous Bakers said: “It is really important that people know exactly where the food we put into our bodies comes from.

“When you look closely at how natural ingredients grow, you really do appreciate just how fabulous the natural world is.”

And it’s only when you look closely at how unnatural PR stories come about, you really do appreciate how fabulously shitty the effect of commercial PR on journalism is.