Over-50s spend £1.5bn a year to keep fit: Half say they become more conscious of their health once they pass that age

When we reach the milestone of 50, it is often assumed that many of us start to dream of retirement and taking life in general a little easier.

But in fact, according to researchers, we tend to develop a new-found interest in exercise when we hit the big 5-0. 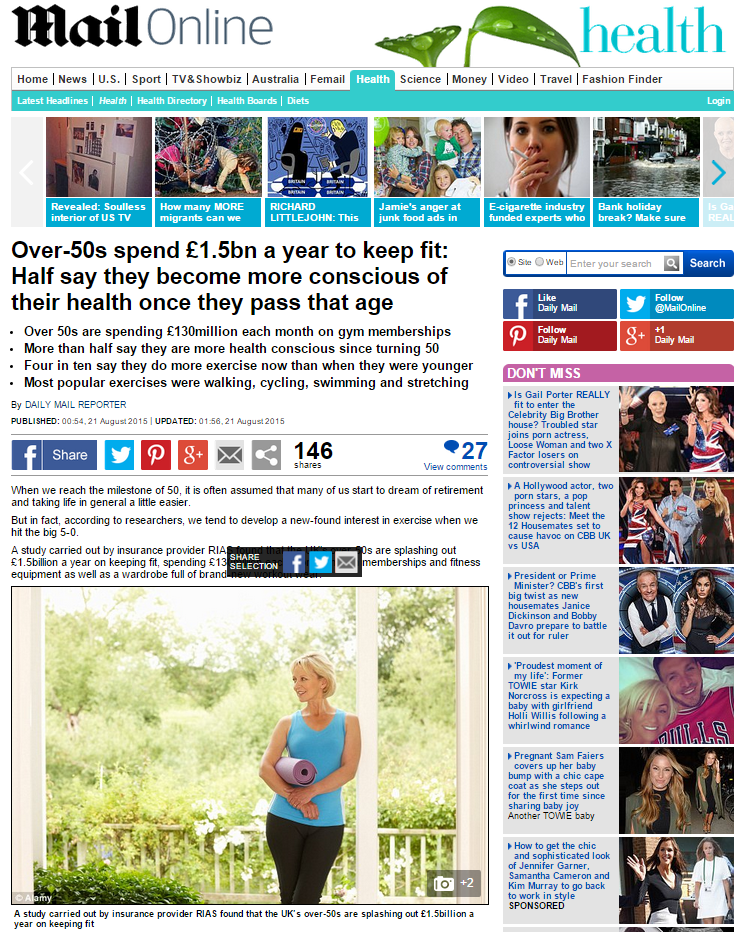 Apparently middle age comes with a renewed vigour to look after one’s health and increased concern for mortality. Or so says insurance provider RIAS:

A study carried out by insurance provider RIAS found that the UK’s over-50s are splashing out £1.5billion a year on keeping fit, spending £130million each month on gym memberships and fitness equipment as well as a wardrobe full of brand-new workout wear.

Needless to say, this story is a near-verbatim paste from the RIAS press release. 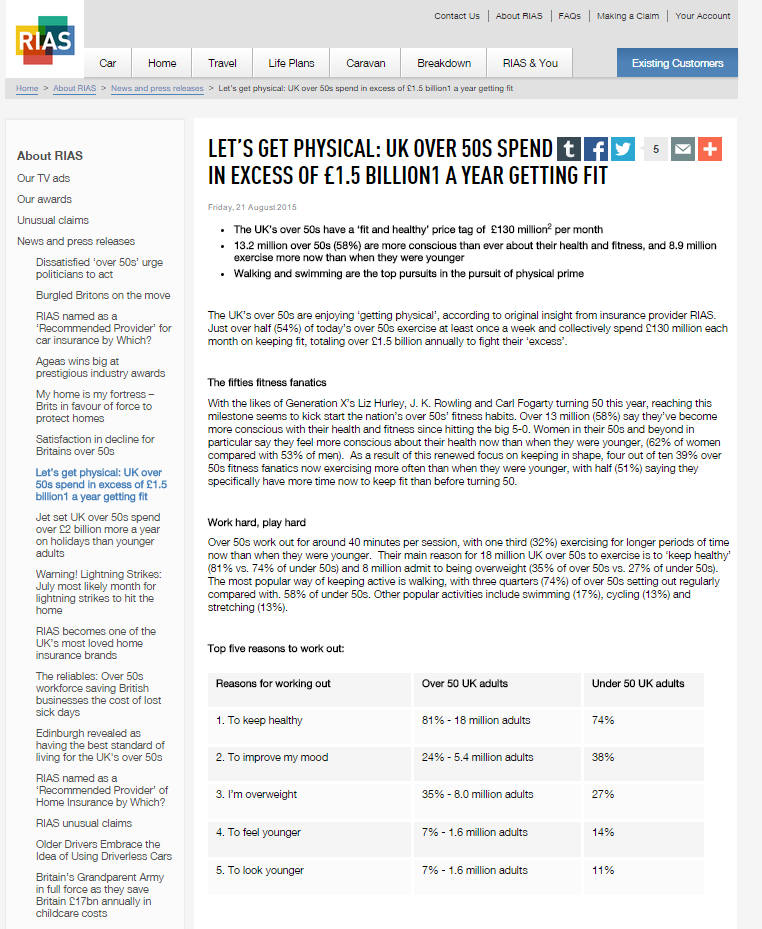 Here’s the RIAS MD to praise the health-conscious 50-year-olds out there:

Peter Corfield, Managing Director at RIAS, added: ‘The UK’s over 50s take their health and fitness seriously and looking after themselves is an important aspect of their life.

‘With the UK facing an ever increasing ageing population, today’s over 50s are tackling this head on by staying physically fit. And no matter how it’s done, people will reap the rewards of a better quality of life.’

And, of course, while you’re considering all of the ways in which you’re embracing your new lease of life at the age of 50, don’t forget that all-important insurance – for when things inevitably go wrong – right, Peter?

What’s the strangest thing to ever have caused damage to your home? It’s unlikely your story can compete with those featured in the Daily Star, Daily Mailand Telegraph recently:

IF a badger has bashed your shed or a snail has eaten your carpet, why not try and make an insurance claim – you won’t be the first to.

Or if a deer falls in your swimming pool, you can earn money from that too. ‘A badger ate my wall’ among successful insurance claims.

A badger that ate through a wall to escape after being locked in a shed and a dog which jumped into a television screen to find a mate are among a list of successful insurance claims filed by homeowners.

One man received more than £400 when he made a claim for a new laptop after his new baby grandson vomited over his computer as he attempted to show him off on Skype.

And in another incident insurers paid for repairs after a quick thinking squirrel smashed a window to get out of a garage owned by an 86-year-old woman in Exeter, where it had become trapped.

Animals and children were the most common causes in the list of strange claims.

However, nature, and bad luck, also played a part. The message is clear: you never know where the next source of danger is coming from. But don’t just take my word for it – there’s an industry spokesman backing me up:

Peter Corfield, Managing Director at RIAS said: ‘While we go out of our way to ensure that our homes and gardens are safe and secure, sometimes it’s the most unlikely events that can end up causing real damage.

The list of bizarre insurance claims was compiled by specialist insurance provider RIAS from the almost 400,000 successful cases in 2012-13.

RIAS are the people telling you to ensure your house (with them) lest a rampaging army of badgers, deer and snails descend upon you and your territory. It’s real, they’re coming, and RIAS are apparently your only hope.