House buying news now, with the report in the Mirror and the Daily Mail that the younger generation are increasingly taking loans from their grandparents to try to get deposits together as they aim to get on the property ladder:

The bank of gran and grandad helps first-time buyers: One in ten rely on their relatives to help them get onto the property ladder

Nearly one in 10 aspiring first-time buyers are turning to the ‘bank of gran and grandad’ to help fund their deposit, a survey has found. As well as saving parents thousands on childcare, retirees are also helping today’s generation make it on the ladder by contributing thousands to their first home deposit

Forget mum and dad, one in 10 aspiring first-time buyers are turning to the “bank of gran and grandad” to help raise their deposit, Santander research has found. Admittedly, the Mirror’s coverage tips its hand a little, running the name of the company behind the story in the first paragraph after the headlines: Santander bank.

Miguel Sard, managing director of mortgages, Santander UK said: “Despite having to use alternative income streams over and above their salary – such as relying on the bank of gran and grandad – today’s first-time buyers are demonstrating resilience and determination to achieve their home ownership goals.”

While it’s almost certainly the case that millennials are having to borrow money from their elders – whose mortgages were more aligned to their income – it’s also the case that this story is just a way for Santander to advertise their services to first-time buyers. Another from the ‘kids are stupid’ file now, with the finding that pupils who have just gotten their GCSE’s aren’t fully acquainted with the realities of payscales:

The average school-leaver expects to earn an annual salary of almost £90,000 at the height of their career – despite the UK average being £26,500, according to new Santander research.

The bank, which is one of the UK’s biggest personal financial service providers, spoke with almost 500 Year 11 students to gain an insight into their career attitudes to discover they think they’ll be taking home £89,000. 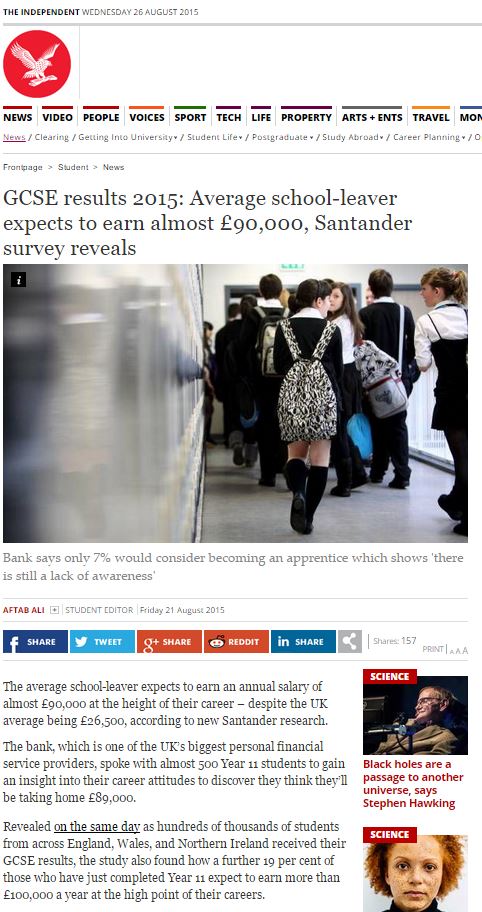 If you know anyone getting their GCSE results today you may want to sit them down and have a word.

The average salary, remind them, is currently £26,500 and while some of them undoubtedly will make a decent amount of money, their expectations are pretty unrealistic.

The findings are from a Santander survey aimed at gauging young people’s career attitudes and expectations, released the day students discover their GCSE results. 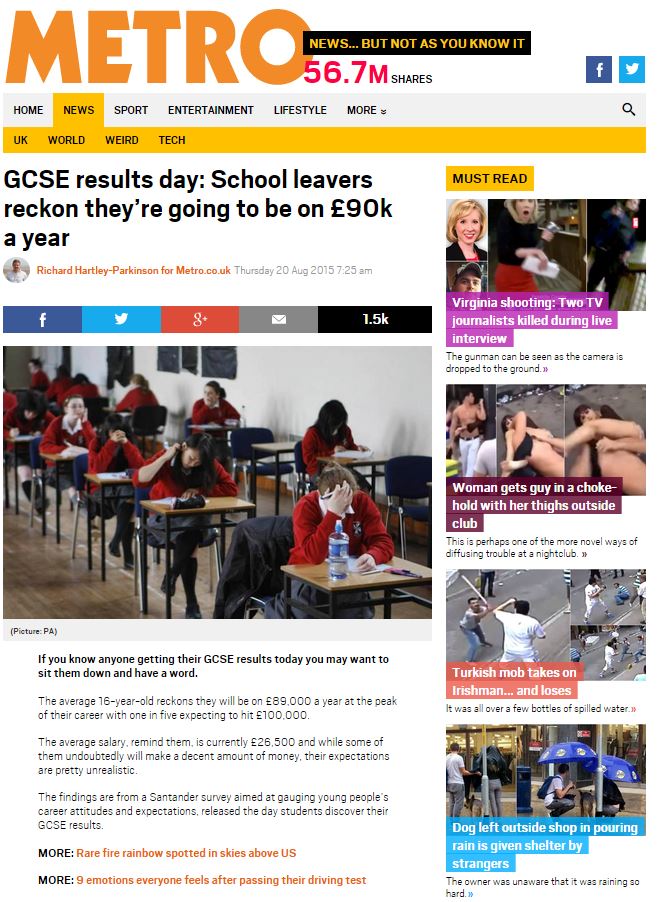 First off, it’s worth highlighting that the story in both papers is merely a trimmed down version of a press release by Santander – meaning no original journalism, or likely even fact-checking, was done by either the Metro or the Independent in this case: 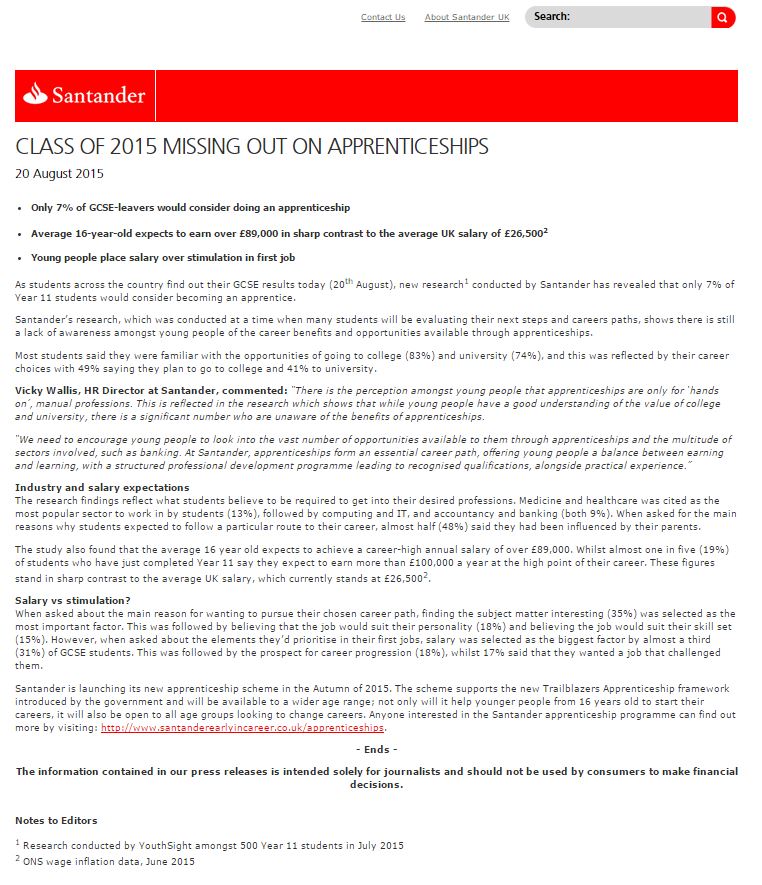 This is particularly telling, as the press release wasn’t overly interested in kids’ earnings over their career as it was advertising Santander’s apprenticeships, as we can see from the quote in the Independent coverage:

The results also showed how apprenticeships are being perceived among the group: only seven per cent would consider becoming an apprentice which, Santander said, shows there is still a lack of awareness amongst young people of the career benefits and opportunities available through becoming one.

HR director at Santander, Vicky Wallis, described how there is the perception amongst young people that apprenticeships are only for ‘hands on’, manual professions.

While young people have a good understanding of the value of college and university, she said, there is a significant number who are unaware of the benefits of apprenticeships.

She added: “We need to encourage young people to look into the vast number of opportunities available to them through apprenticeships and the multitude of sectors involved, such as banking.”

As for the kids and their sky-high salary expectations, while what they want to earn might not be too closely aligned to reality, to have this pointed out by workers in the banking industry is something of a pot and kettle scenario.